I’ve just seen my neighbour, Philippe, dressed up in his best denim and with his teeth in.  He must be going out for lunch.  Usually he brings me a bunch of lilac on May the first but he seems to have forgotten this year.  Perhaps I’ve done something to upset him.

Philippe is a good neighbour and brings us gifts of wild mushrooms and fruit from his orchard.  He has a friendly rivalry with Paul as they compete to see who has the best potager each year and they both like to lead each other astray.  If I can’t find Paul it usually means he’s over at Philippe’s sampling the latest batch of eau de vie.

Last summer I was surprised to see Philippe walk past my kitchen window carrying this.  What were those guys up to now? 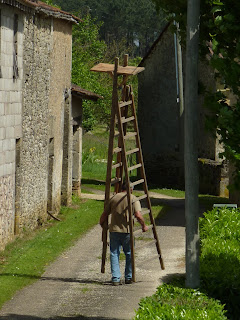 Paul had discovered a swarm of bees in one of our trees.  Philippe had decided that if they could get a hive close enough to the swarm, the bees would happily fly into the box and had reassured Paul that it would be quite safe, they didn’t need any protective clothing.  So they gingerly manoeuvered the ladder with the hive precariously balanced on top underneath the swarm. 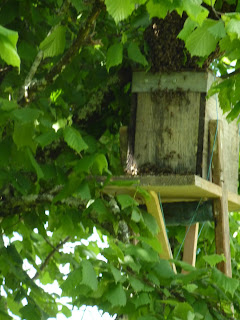 I watched from the safety of the house.  The hive and ladder were in position but Philippe wasn’t satisfied, it had to be closer.  They edged the box closer and suddenly all hell broke loose.  Philippe was running up the road removing his t-shirt as he ran, and Paul literally vaulted over the wall towards the house.  The bees were not happy. Luckily Paul escaped with no stings and Philippe just two. 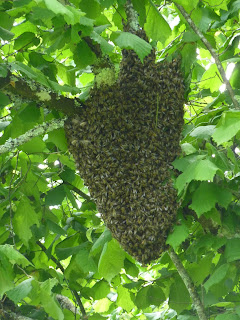