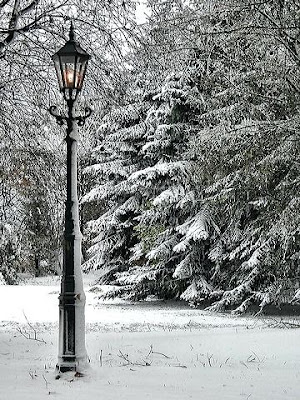 It is like a scene from Narnia outside.  Freezing fog and ice covered trees.  Everything is white.  No snow, fauns or white witches though.  The air is really still, no breeze or bird activity.

I  have been making leek and potato soup, we shall have it for lunch with homemade bread. Comforting winter food.  In Sydney they are struggling with the heat.  Forty degrees and power failures.  I think I prefer the cold although I might change my mind when I take Rick out this afternoon.

Yesterday I went to a coffee morning at the village hall.  Everyone was very friendly but I’m not sure it is my scene.  However, I have been introduced to a member of the local art group so that sounds more promising.  I don’t think this village is going to let me be a hermit. 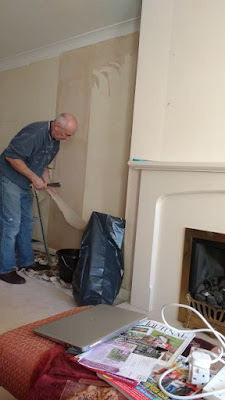 Today I am stripping.  Wallpaper that is. Getting rid of all traces of the previous occupant’s pride and  joy.  Paul has been doing the hard work of soaking the surface while I have been enjoying the satisfying job of pulling off big swathes of wet paper.  The sitting room looks quite stark now, the Jacobean floral curtains from the big bay window have been taken down and are being used as dust sheets.

We are going to paint the walls with matt emulsion. Choosing a colour has been tricky. We bought tester pots and there are various splodges of colour daubed about.  I was leaning towards having a grey tone on the walls but I was worried the room would end up looking like a battle ship. In the end we picked a very neutral, stone colour – Natural Calico.  A bit boring but I prefer to add colour to a room with paintings, rugs and soft furnishings.

Rick is unhappy with the chaos.  I shall take him out early after lunch for his walk because we have snow forecast for late afternoon.  It was sunny here first thing but the skies are getting progressively darker.  If the snow is very deep I shall have an excuse not to go to tomorrow’s coffee morning at the village hall. 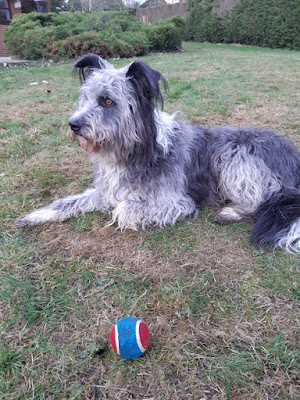 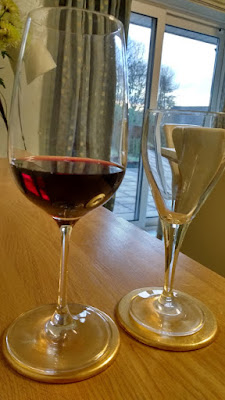 I drank too much wine last night.  It was a very fine wine, an Argentinian Malbec, but I definitely had too much.  I blame the new crystal glasses we bought.  Red wine glasses are traditionally larger than white wine glasses but these are enormous.  In posh restaurants they usually only pour about an inch of wine in them so you can savour the aroma and swirl the wine around and pretend to be a proper connoisseur but I think Paul probably poured in about half a bottle.

Anyway, I had cause to celebrate.  I visited the hospital on Thursday and received the good news that my lump was benign and I shouldn’t need any further treatment.  Hurrah!  It is a huge relief.  The doctor checked my vocal chords and announced that they were undamaged following the surgery.  Unfortunately I still can’t sing in tune.

There was a heavy frost yesterday morning but it was a beautiful day, all blue skies and sparkling.  This morning was very different, damp and misty when Paul set off with Rick for his early walk.  Within minutes they were back, the footpaths were covered in black ice and Paul was struggling to stand upright.  Apparently you should walk like a penguin on icy surfaces.  Some people would say that I always walk like a penguin.  Rick had to be content with a wander around the garden until the ice had melted later in the morning. 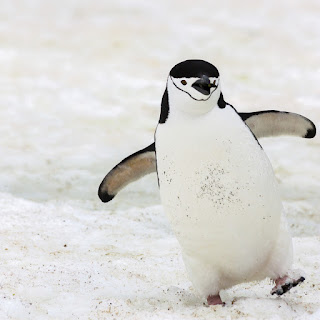 I stayed indoors and decided to christen the new bath.  It was wonderful, luxuriating in the hot, bubbly water.  But as I wallowed I noticed that the water level seemed to be going down.  Surely not?  I topped up with some more hot water and watched.  Yup, very slowly the water was disappearing.  The super duper modern pop-up plug was not working properly. It will have to be replaced.  We never had this problem with the good old fashioned rubber plugs.

Did I tell you I have a new bathroom? I have become a bathroom bore.  Anyone who calls round gets a “would you like to see my new bathroom?” The postman was quite surprised.

The window needs a blind.  Paul said he would like a patterned one.  Pattern?  In my classically styled room?  He’ll be wanting blue plastic dolphins and yellow rubber ducks next.  But if Paul wants pattern he shall have pattern.  I have chosen Mr Fox. 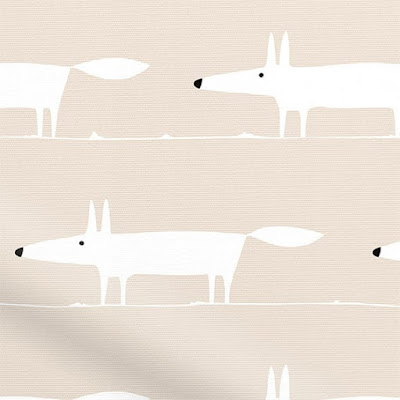 I think Mr Fox is rather cute.

I must be feeling better because I ventured into the kitchen today and did some cooking.  First up I chopped some chicken to marinate in a harissa paste.  Later today I shall put this into a big pot with some dried apricots and chickpeas to make a tagine.  I was prompted to make this after seeing it mentioned on a blog recently (Rachel) - it was on the menu  of an Algerian café she visited.


After making the harissa paste I turned my attention to some left over puff pastry and apples.  The apples have stored really well in their boxes outside but need to be used up quite quickly now.  I melted some sugar and butter in a pan and made a Tarte Tatin.  It came out okay (I left the skins on this time) but it wasn’t quite caramelised enough and the pastry could have done with extra cooking.  Tastes good though, I couldn’t resist trying a piece after it came out of the oven.  I think I shall remove the skins the next time I make it.