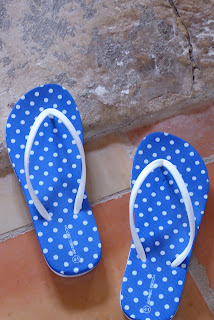 Nothing much to write about today.  We went to the supermarket this morning to stock up on booze and dog food.  I was surprised to see a woman carrying her small dog in the vegetable section, I didn’t think dogs were allowed in the store.  Then I realised it was a large lettuce she was holding.  Might need to get my eyes tested.  I further embarrassed myself by putting my cheese in the wrong cart.

“Oops, wrong trolley!”  I trilled. The small child who was guarding it looked at me as if I was a total nutcase.  No wonder Paul doesn’t let me out on my own.

We called in at the shoe shop, I wanted to get some cheap, lightweight shoes for the garden.  My flip flops don’t really give me the support I need while I’m limping about with a bad knee.  The only comfortable ones I could find looked gross.  I tried some Crocs, it was like walking with a pair of polystyrene plates on my feet.  How does John Gray do it?  In the end I bought some new flip flops. 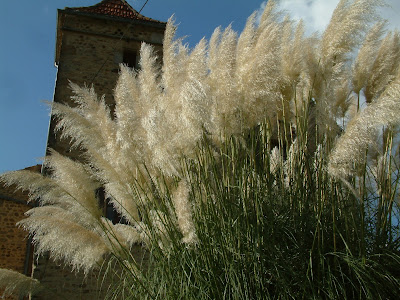 I am hoping there will be some vestiges of summer left when our guests arrive in September but there are already signs of autumn approaching.  The cherry trees are rapidly losing their foliage and the hazel nut tree is sprinkling the terrace with nuts and brown, crunchy leaves. 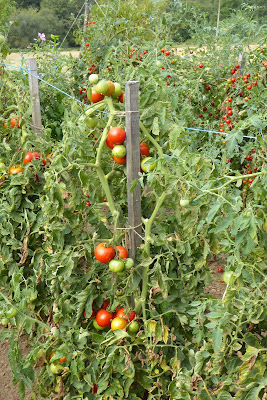 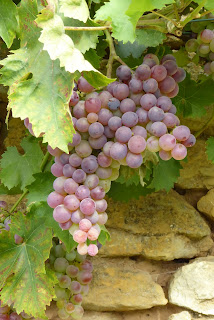 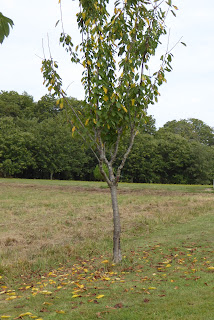 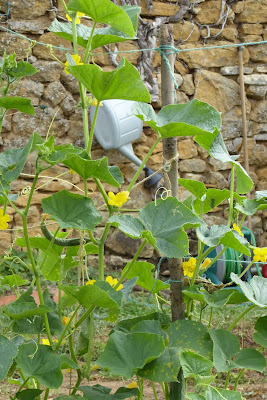 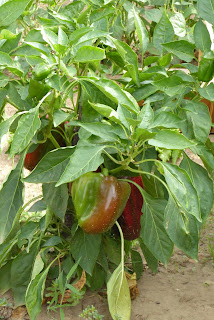 The eating grapes are turning colour and we have some large red peppers ready for picking.  Overripe tomatoes are falling to the ground.  The latest crop of French beans is not producing much but the new cucumber plants should be okay.  Hurry up and get here my girls before it all disappears. 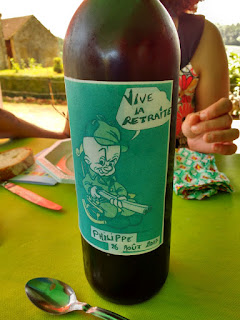 Ten years ago we were invited to Philippe’s fiftieth birthday party.  It was an elaborate, all day affair with lots of food and merrymaking.  We thought perhaps he had let his sixtieth birthday and retirement pass with just a quiet, family celebration until he caught Paul a few days ago and told him we were invited for some drinks at midday on Saturday. Just some drinks and nibbles I could cope with, the thought of a big party filled me with some trepidation.


“Oops, could be more than a few drinks,” said  Paul, “I’ve just seen Philippe and Matthieu carrying a whole lamb on a spit towards the barbeque.”

At midday cars arrived from all directions and family and friends assembled in Philippe’s garden.  We nervously approached and were instantly welcomed and gathered into the party. Tomas, the young boy who holidays here each year and loves to ride his bicycle, had flown from Lille to Toulouse by himself as a special surprise; he was so proud to be there. Tables and benches were all set up and the garden was awash with colourful balloons.  Pastis or a grape skin aperitif  and delicate pastries were handed round before we sat down to eat a lengthy meal of melon, ham, salad, terrine, lamb, haricots de Mamie Christiane (Philippe’s mum), cheeses and profiteroles.  This was all accompanied by wines from the family’s vineyard.  It was a happy and joyous occasion. Paul managed to get some snaps of the occasion from his 'phone, the quality isn't great but it gives you a flavour of the day.


Philippe’s ‘posh’ brother from Paris made a long speech (I couldn’t follow it but there was a lot of emotion and Philippe cried) before he was presented with a special gift - a brand new shot gun.

The meal finally ended at about 6.00 p.m. but the party continued until the early hours. Paul and I left early, staggering back home at about 7.00 p.m. to a rapturous welcome from Rick.  It's unusually quiet in the hamlet today.

I have my feet up and Paul is waiting on me.  This should make me very happy but it does not. I have a bad knee and I can’t cycle and I can’t walk the dog.

I’m not sure what is wrong with my knee.  Google suggests things like cartilage tears and other scary things; it’s probably best not to look at Google.  Most of the time the joint is not painful and then suddenly it locks up and hurts like hell.  This morning it seized up completely and it was only after some ibuprofen and a glass of red wine that I was able to ‘unlock’ and move again.  Rick has sensed something is not right with me and has been cuddling up.

Consulting a doctor will be a very last resort so in the meantime I have strapped it up and will continue to take the ibuprofen and red wine.  I need to get fit before my special guests arrive in two weeks’ time.