This wet weather is putting a real dampener on things.  The route through the Yorkshire Dales for the World Road Race cycling event has been changed due to flooded roads and conditions that would be a danger to both spectators and riders.  It would be nasty if someone disappeared down the Buttertubs.


A Family Fun Event that has been organised by our village hall committee is going ahead this afternoon despite the rain.  I have a feeling that the Duck Race could be exciting as the beck is in full flood.  It's such a shame when so much work goes into planning and organising these events.

On a brighter note the red peppers that got off to a slow start in the greenhouse have performed wonderfully well.  I picked a big batch yesterday to blacken under the grill -  I love char-grilled peppers.  A little taste of summer. 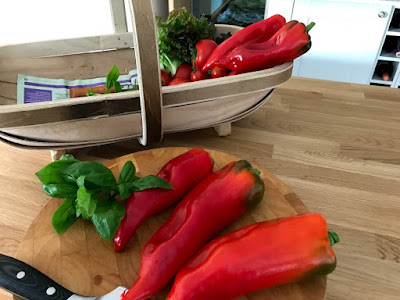 
Today a couple of my coffee morning pals whisked me off to Gainsborough, with the intent purpose of visiting the Old Hall, the last remaining medieval building in an unremarkable town.  This huge, imposing manor house sits incongruously in the middle of a residential area.

My friends insisted on having an audio guided tour which actually worked very well after I finally managed to figure out how to operate the gadget and turn the volume to high.  Unfortunately the battery ran out half way round.

It is an impressive medieval manor house built by Thomas Burgh in 1455. It had two royal visits, Richard III  in 1483 and Henry VIII, together with his fifth wife, Catherine Howard, in 1541. Gifted to the nation in 1970 the hall is now owned by English Heritage and the local district council.  Some of the props and costumes looked a bit cheap and amateurish, it would have been nice to see some furnishings that looked a bit more authentic.  But the medieval architecture was stunning.

So many old buildings have ghost stories attached to them and Gainsborough Old Hall is no exception.

Local legend says the Grey Lady is thought to be the daughter of the Lord of the Manor who fell in love with a poor soldier and planned to elope with him. Her father discovered the plan, locked her away in the tower where she died from a broken heart. Supposedly the girl’s spirit still wanders the tower and the corridor endlessly waiting for her lover to arrive.

I didn’t see the Grey Lady but the stuffed wild boar in the kitchen was a bit disturbing.


The sun is shining and it’s perfect gardening weather.  I have been outside helping Paul plant foxgloves around an ivy covered tree stump (helping as in pointing out where I wanted them planted).  Foxgloves should do well in our sandy soil here and I’m hoping for a pretty display in spring.  We  removed the buddleia that had grown into a monster and was swamping the roses and clematis and planted some foxgloves in its space.


Rick has been helping too.  He has been throwing Bunny the Second around and generally showing off. 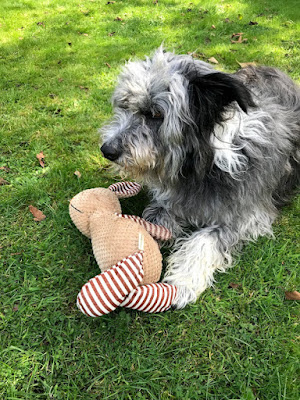 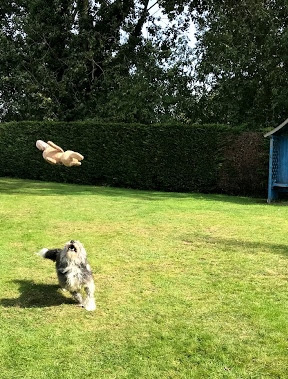 
Sometimes you just have to admit that things are not working out how you’d hoped.  Everything had started off in quite a promising manner but things went downhill after I tried to add bluebells among the trees.  Yes, I’m talking about my masterpiece.  The more I tried to put it right the darker it became.  It resembled a piece of badly painted pantomime scenery.  In the end I threw a hissy fit and asked Paul to dispose of it.  He took it to the local tip.

I am not downhearted.  I’m glad I tried. 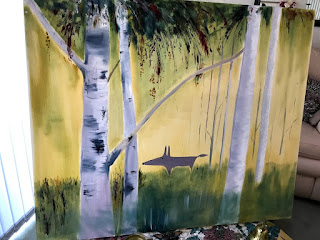 On a positive note Paul has recovered from his bad back and has returned to his Duracell bunny mode.  A new project is waiting for him – to transform the narrow, dark hallway into a light and welcoming entrance.

I knew something was wrong when I woke up in the middle of the night to find Paul on his hands and knees on the bedroom floor.

"It's my back, I can't move!"  He was trying to get to the bathroom.  The previous day he had 'tweaked' his back while doing some DIY stuff in the new kitchen.  He went bowling on Friday evening and seemed fine when he returned.  He was in a lot of pain yesterday that was only relieved by him stretching out on the floor with his knees bent and feet resting on a stool.  And a hot bath. And being waited on.

Today he is much better but still not very mobile.  I am on double dog walking duties and head chef and gardener.  Yesterday Paul talked me through pizza making process.  I was quite pleased with the result except it was square and not round.  This has all meant that I haven't been able to proceed with my oil painting and the masterpiece is at a standstill. 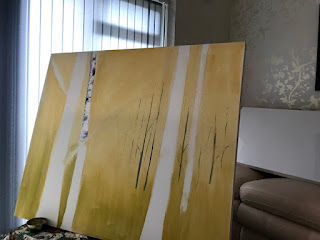 I did manage to get a Yellow Ochre wash (thank you Cro) on to the canvas yesterday morning but my attempt at painting a birch tree was not overly successful.  It resembles a Dalmation dog's leg rather than a tree trunk.  So my artistic endeavours are temporarily on hold until I can give it my full attention.

Got to go, someone's calling me...