I Wanna Dance With Somebody

Do you sing in the shower?  I tend to warble away to O Mio Babbino Caro or Whitney Houstons’ I Wanna Dance With Somebody.  I make a terrible racket but I just assume that no one (apart from the owls in the tower above the bathroom) can hear me.  What do you sing?

While we were drinking wine and listening to music from the sixties on the terrace a few evenings ago Paul discovered on Spotify that there are play lists designed specifically for the shower.  Now I always have a problem with remembering the lyrics of songs and tend to just repeat the first line over and over again or make the words up so I said “wouldn’t it be great if someone invented a shower karaoke kit so you could see the words?”  Paul was not impressed by my light bulb moment, this piece of kit has been around for years apparently.  Perhaps I should add it to my wish list for Christmas. 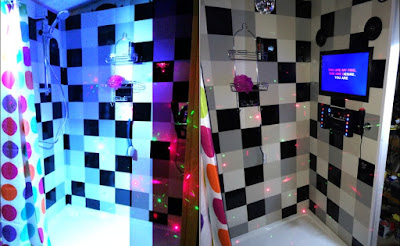 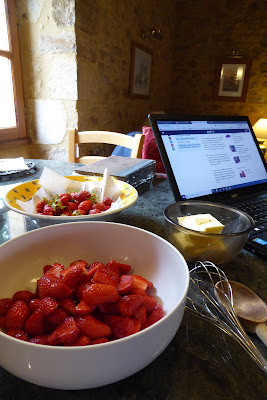 "A strawberry what?"
"Strawberry torte darling – it’s a pudding."

I just couldn’t face eating another strawberry so I decided to make a strawberry and cinnamon torte.  It was very easy to put together but needed a whole hour to bake in the oven.  The aroma of baking strawberries was heavenly.

The torte is supposed to finished off with a sprinkling of icing sugar.  I didn’t have any so I put some castor sugar in my Moulinex whizzer, didn’t fix the top on properly and managed to completely wreck the machine.  Sigh. 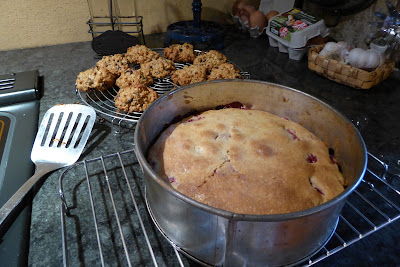 The torte tastes good though without the icing sugar.  I shall serve it with creme fraiche for lunch. 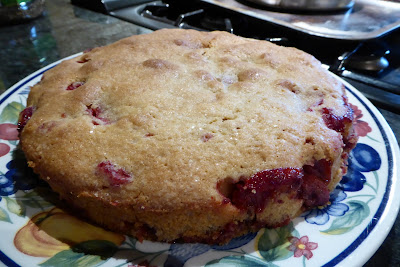 
Alcoholic cherries!  I soak the cherries in a mix of eau de vie, vodka, brandy, syrup and allspice.  Put them in airtight jars, place them in a dark cupboard and retrieve them about Christmas time. The cherries will be delicious and the liqueur just wicked.

I am currently cowering indoors while a storm passes overhead.  This old house is literally shaking and rattling with the thunder.  Rick is hiding under a chair with his favourite tennis ball. 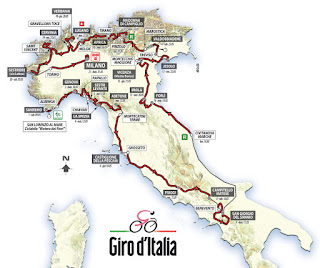 I dusted off my bicycle this morning.  We just haven’t had time or inclination to cycle this year yet.  I didn’t go far, just along the lane to the poubelles with a sack of rubbish.

Right now I am watching the Giro d’Italia, Italy’s version of the Tour de France. I’ve never watched it before. I thought Maglia Rosa was winning until I discovered that’s the equivalent of the Yellow Jersey, in this case a nice shade of pink.  I’ve followed the tour from the start in Jerusalem and first three stages in Israel, across to Sicily, and then up through the mountains and glorious scenery of Italy.  Tomorrow’s final ends in Rome.

Chris Froome had an early fall in Jerusalem and didn’t seem to be performing well, he was down to twelfth place at one point.  Yesterday he made an early break nearing the top of a mountain and stayed ahead on his own for 80 kms, winning the stage and taking the pink jersey.  Right now he is just starting the final climb of the day positioned well towards the front of the peloton.

Six kms to go, all up hill, and Froome and Dumoulin are playing cat and mouse trying to break away from each other.  Out of a tunnel and Froome has managed to break from Dumoulin.  Paul is sitting on the edge of the sofa. Rick is asleep.  Dumoulin is back.  Mikel Nieve wins the stage but the winner of the Italia is going to be .................. (providing he doesn't fall off his bike) Chris Froome!  Yay!

I really should squeeze into my lycra again.

Still here. A little pre-occupied and distracted at the moment but enjoying the summer. 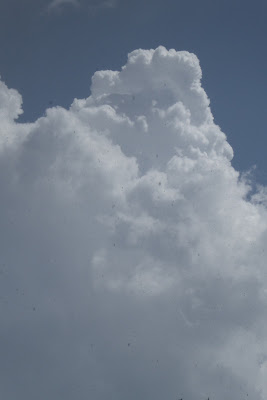 Paul said he would join Rick and me on our afternoon walk.  I put my walking boots on and put Rick in his harness while Paul went downstairs to the buanderie to get some prawns out of the freezer for dinner.  Ten minutes later Rick and I are still waiting for Paul to appear so we went in search; the doorway to the buanderie is low and I thought maybe he had knocked himself out.  He was still upright and conscious but struggling with a broken bag of prawns that apparently had exploded and fired prawns in all directions.

Twenty minutes later Paul finally joined us for our walk. Rick was excited and impatient to get going. It was very warm so we were both wearing t-shirts and shorts.  We had just gone through the gap in the laurel hedge when there was an enormous clap of thunder directly overhead. Paul and I looked at each other and decided to go back to the house, much to Rick’s disgust.  Not a moment too soon because suddenly the heavens opened and down came the rain. 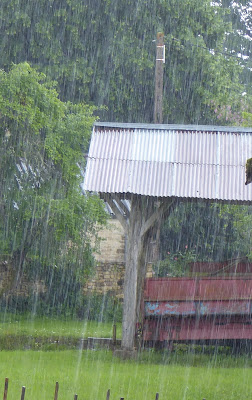 If the prawns hadn’t exploded we would have been a long way from home when the storm broke so I guess we were lucky.  Not sure what we’re having for dinner tonight though. 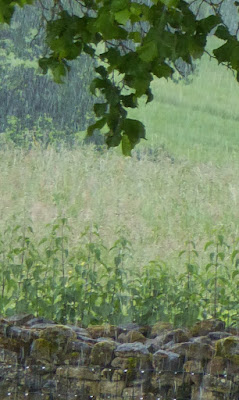 The sunshine returned today and suddenly everything seems brighter in the world.

I took Rick out for his walk this afternoon.  It was very pleasant walking in the sunshine listening to the crickets, they were extraordinarily noisy.  The wheat is growing fast in the fields and there are orchids and white daisies growing along the verges.  I walked through the woods and then followed the pathway that Paul had cut earlier with his ride on mower.  The local farmers have not got round to cutting the grass this year yet and the footpaths are very overgrown. 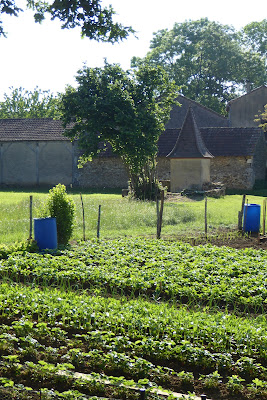 Paul was chatting to Philippe in his garden when I got back. Philippe is very proud of his potager, he retired last year and spends hours now weeding and hoeing and planting in very straight lines.  Paul came back shaking his head and I asked him if everything was okay with Philippe.

“No, he is very upset.”
“Oh, no, is someone ill in his family?”
“No, worse.  A blaireau got into his potager last night and ate the strawberries.”

A blaireau is a badger.  I know badgers eat worms and insects but I didn’t realise they eat fruit too. Philippe needs to secure the fencing around his plot to make sure he doesn’t return.  I've put Rick on badger watch to make sure my strawberries are safe.