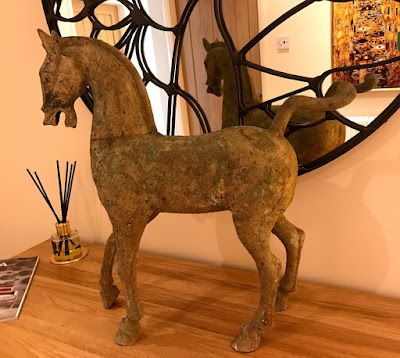 This morning I walked down to the village hall for my weekly dancing session.  I never realised line dancing could be so much fun.  I am finally mastering some of the steps although if my attention wanders (who is that person walking past the window?) I find myself completely flummoxed and facing the wrong way.

When I got home there was a large brown parcel waiting for me in the hallway.  I was very excited, my horse had arrived.   Poor old Jeremiah the polecat has been moved to make way for my splendid bronze Tang dynasty horse. 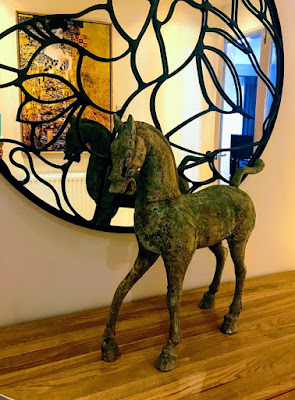 The day continued in a positive manner with a tasty lunch of salmon gravadlax and scrambled eggs.  Paul had prepared the salmon by curing it in a wrapping of salt, dill and sugar for forty eight hours; he served it thinly sliced with a honey and mustard dressing. This salmon dish originates from Scandinavia when fishermen used to preserve the fish by burying it in the sand.  It sounds absolutely disgusting but was in fact delicious, with a delicate taste and texture.

I have just read this back to myself and I sound so bloody smug and self satisfied.  Sorry, I’m wearing my rose tinted spectacles today.

Paul is playing bowls tonight, he’s just gone off to polish his balls.

Now you're not to worry but...

We were slightly concerned when we didn’t hear from our daughter, Sarah, as the New Year dawned in Australia and the UK.  She was camping out in the countryside south of Sydney with Buddy and fiancé, Chris and we knew the phone signal was poor there.  It was a trip that she had planned for weeks ahead and had pre-checked with the remote riverside campsite that the risk of fire was minimal before setting out with their new tent and inflatable boat.


It was New Year’s day morning when we finally heard news.  They were holed up in an evacuation centre in Ulladulla after the roads were closed due to the catastrophic bushfires.  After a couple of days camping in the bush Sarah had become nervous as the fires seemed to be spreading rapidly.  They had packed up and decided to return to Sydney early but found the exit roads blocked by fire.  All the motels and guest houses in the ‘safe’ area were full as hundreds of the holiday makers in the area all flocked to the relative safety of the seaside town.

Sarah, Chris and Buddy spent two nights with hundreds of other evacuees in the Civic Centre at Ulladulla, at times with no power. “There’s a guy here called Rick Stein, apparently he’s a well known chef?”  It wasn’t just holidaymakers, some local residents had been trapped after just going out to do some shopping.  It all happened so quickly. They did not go hungry as local bakers and takeaways donated food to the evacuees.  They were safe but were shocked by what they had experienced.

On Thursday morning the main highway was re-opened and they joined the long queue of traffic heading north.  Fuel was short as many pumps had no power but luckily they had a full tank of petrol.  Sarah sent me photos of the blackened and burnt countryside as they slowly drove back to Sydney.  It was a shocking and eerie sight.  Seven people had lost their lives in a small settlement close to Ulladulla.  Hundreds of homes have been lost.  I can’t even bear to think of the wild animals and live stock that have perished.


Sarah finally got back to Sydney just after midday on Thursday.  They were lucky because the roads were closed again later that day.  Sarah sent me a message “We’re sat in our usual spot in our local and it’s never felt so good to be back in the city.”