I hurt my knee a couple of weeks ago and, although it’s much improved, I have been opting for the early morning dog walks because I’m less likely to meet people and traffic and therefore less likely to twist my knee trying to restrain Rick.  Usually if I go out just after seven the village is wonderfully quiet and I rarely meet a single person.  Today was different.

I turned left out of the driveway to avoid the large crane that was delivering to Mr Jellyneck’s building site (he is building a big, new house for himself) and promptly bumped into a portly, bearded gentleman out for his morning walk.  Then I met a neighbour and his two dogs, Finlay and Poppy, so we had a chat, being careful to keep our distance from each other.  Rick was behaving well until the crane drove back through the village.  I managed to keep hold of him as he lunged towards the lorry but then he and Finlay started howling in unison.  When another lorry then came into sight I decided it was time for us to make a hasty exit.

We were almost at the top of the hill by the church when I heard the loud, rumbling sound of a tractor in the distance and so I broke into a trot, if you can call it that (more of a hasty hobble) but failed to reach the back lane before two, massive clanking tractors passed us.  I hung onto Rick as tight as I could as he barked himself into a frenzy.  It was a relief to get away from the main village road and onto the footpath that runs back down the village from the church.  We then walked up Washdyke Lane and lo and behold, the portly, bearded gentleman was heading towards us.  We greeted each other like old friends and fortunately Rick was more interested in sniffing the hedgerow rather than savaging a stranger.  My knee was starting to ache by now and I was hoping there would be no more obstacles ahead.

Just as I was starting to relax and enjoy the walk I turned the corner and an oil delivery tanker was parked in the centre of the road, engine running and noisily pumping oil to a house.  It would have been tricky getting Rick past such a monster and then it was just as likely to catch up with me down narrow Middlefield Road.  So we turned right along the lane to Prospect Farm and Rick had fun watching rabbits that were hopping along the grassy verges.  By the time we came back the oil lorry had moved off so our walk home was clear and Rick trotted along next to me and behaved beautifully.

“Did you have a nice, quiet walk?”  Paul said when I staggered through the doorway.

Make Do and Mend 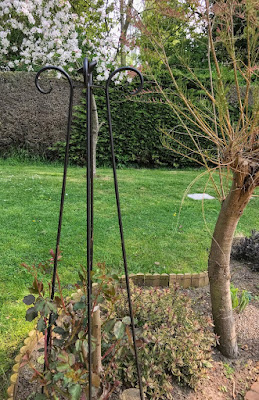 One particular purchase I wanted was an obelisk to support the climbing rose at the end of the patio.  Last year the rose flowered profusely and had to be propped up with canes to stop it flopping over.  Paul came up with the bright idea of using an old lamp stand in place of an obelisk.  The lamp was damaged during our move to the bungalow; the clumsy removers managed to completely break the neck of the lamp and it has been gathering dust in the garage ever since.  Paul made a couple of adjustments and now I have an obelisk!  Sadly it doesn’t light up at night!  I just think it needs a copper ball or something to sit on the top. 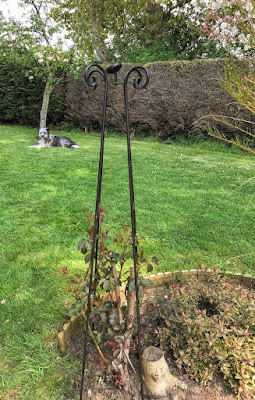 Next to the climbing rose is our tamarisk tree.  It has grown well since a harsh pruning last year and is now sporting pink flower buds.  I'm so pleased it survived. 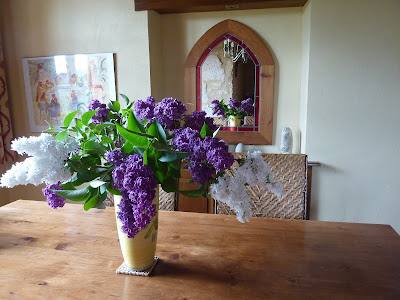 Our lilac bush is situated in the darkest corner of the garden and the blooms are not yet out.  In France, at this time of year, our neighbour Philippe would always present me with a bouquet of lilac cut from his garden.  It was a sweet custom that I was thinking about a few days ago.

Yesterday the postman delivered an envelope with a French postmark.  Inside was a card from Philippe and Patricia with a note – Lilac for Susan.

What are you looking at?

During our family chat on WhatsApp yesterday morning, Sarah sent a photo from Sydney. It was sunset and this was the view from her balcony.

The conversation then became a bit silly with all of us (including Rick and Buddy) sending shots of what we were looking at right at that moment.

What are you looking at right now? 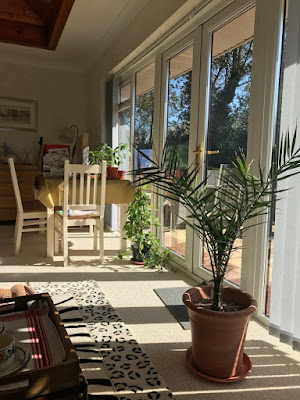 The garden room is my favourite space at this time of year.  This morning there is bright sunshine outside but, with an easterly wind blowing, it is too chilly to sit outside.  The garden room faces south and is warm and bright, with extra light coming down through the skylights in the ceiling.  This is not an add-on conservatory but an original and integral part of the bungalow, quite unusual with the high vaulted ceiling.

Paul thinks it’s an ideal nursery for all his young plants so there are various pots scattered around the room.  Last year he grew a cup and saucer vine (Cobaea scandens) from seed; after a false start he managed to nurture a vigorous climbing plant that produced exotic flowers all summer long.  This year he had more success with the seed but it has grown far too quickly and is branching out in all directions.  The temperatures are too low for it to be planted outside yet so, like us, it’s on lockdown indoors. 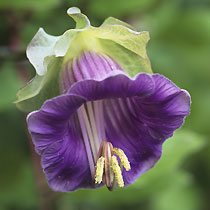 Earlier today we had coffee and cake in the garden room, luxuriating in the sunshine.  Rick had his Dentastix chew that he happily chomped in front of the French doors.  Suddenly he froze as a large, ginger cat appeared at the other side of the doors and peered through the glass at us.  Rick went berserk, leaping and barking at the cat.  The cup and saucer plant was completely upturned and trampled under paw.  Oops!

I think the plant will survive.

You may remember back in October last year I posted a blog about Paul's latest garden project - hugelkultur.

Hugelkultur is a very old practice originating from Germany that allowed people to grow food in abundance, without the need of irrigation. The buried wood and other bits of compostable material in hugelkultur beds create a fungal-rich base that retains water and provides essential nutrients to the plants growing in the bed.


Paul has filled the base of his structure with apple wood cuttings and old cardboard, covered with a layer of topsoil.  This will break down over the winter months and he will add the strawberry plants in the spring.  It looks very smart and I shall look forward to a bumper strawberry crop next year.
This is how the hugelkultur is looking today...

I'm really hoping we get a good crop of strawberries this summer.

Yesterday morning I had a sudden spurt of energy and decided to paint the skirting board and door surrounds in the bedroom.  Paul looked a bit dubious but fetched me the brushes, paint, dust sheet, etc. from the garage.

“Make sure you mask everything off properly and don’t forget to have a bowl of warm, soapy water to wipe down the paint guard as you go.”
“Yes dear.”
“Be careful you don’t get any paint on the wallpaper or carpet.”
“No dear, leave me to it, I’ll be fine.”

I sanded the old paintwork down, hoovered up the dust, wiped it and carefully masked off the area to be painted.  It was quite tricky getting down low on the floor, my knees don’t bend like they used to.  It was while I was trying to get into a comfortable position that somehow I managed to move backwards and, quite elegantly, sit in the bowl of warm, soapy water.  The bowl tipped over and I was completely soaked.  So was the carpet.

I screamed and cursed.  Paul came into the bedroom, calmly picked up a paintbrush and did the job.  Perfect. 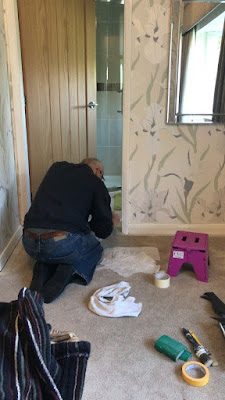