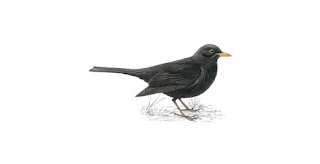 I felt inexplicably sad yesterday.  Maybe it was the thought of so many people out there in the world dying from the virus, or the brave medics and other support workers trying their best to look after us all.  Or maybe it was the poor blackbird fledgling battling for life on our patio.

The young fledgling must have left its nest early yesterday morning to explore the garden and then fell victim to a boisterous dog.  Paul managed to grab Rick and pull him indoors but the bird just lay prone on the flagstones.  I thought it was dead but then we saw his head move.  He suddenly jumped up and hopped onto the flower bed before collapsing again.

We didn’t know what to do.  Should we put him in a box and bring him indoors to keep warm?  Should I offer him a worm to eat?  We consulted the RSPB site and they advised leaving the bird alone.  If the parents were nearby they would come and feed the bird.

So we kept Rick indoors and waited.  Hour after hour.  Every time I thought it had died his head would move.  It was awful to watch and we felt so helpless.  Then, just after midday, he suddenly flapped his wings, staggered to his feet, and hopped towards the hedge.  A couple of adult blackbirds landed on the grass nearby.    Eventually he disappeared into the hedge.

Before letting Rick out into the garden in the afternoon Paul thoroughly checked the garden and there was no sign of the young blackbird.  Hopefully he had found his way home and would live to fly another day.