There is a right of way (chemin rural) through the middle of our property.  Monsieur Escalier used to drive his tractor through very occasionally before he retired but nowadays it is just the random horse or hiker ambling through.

This weekend is the annual two day equestrian event when dozens of horses will gallop across the various tracks meandering through the chestnut forests and along the chemin rural through our garden.  On previous occasions the weather has always been dry and there has been hardly a hoof print marking the grass but with the amount of rain that has come down this week we know the ground is going to be churned up considerably.  For once I am not looking forward to the spectacle.  I think our new gates will get very muddy.


I have just been grooming Rick.  He seems to enjoy this ritual and is particularly partial to a bit of Vivaldi playing in the background.  We are just chilling out. 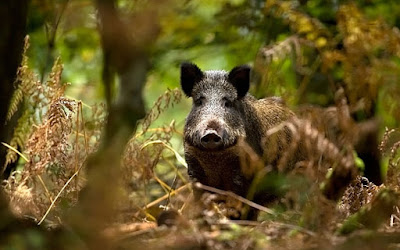 It's a Dog's Life


Rick is starting to feel more at home.  He has become inquisitive and slightly mischievous.  He stole one of my decorative pine cones and demolished it in seconds. He chases butterflies and bees and barks at any sparrow that dares to fly across his air space.  I’m glad he’s got a naughty streak.

They forecast storms and rain all day so we took him for an early walk through the woods; Diane the Dawg came with us.  We got soaked and then it stopped raining when we got home and the sun came out.  I had forgotten how time consuming it can be caring for a dog.  Long walks, grooming sessions and cuddles.  The pile of ironing grows higher.  My rockery is neglected and bindweed is curling its way through the plants.  My sempervivum has gone berserk and sprouted odd looking flowers.  This is a kind of swan song because after flowering that particular rosette will wither and die.

A Trip To The Vet 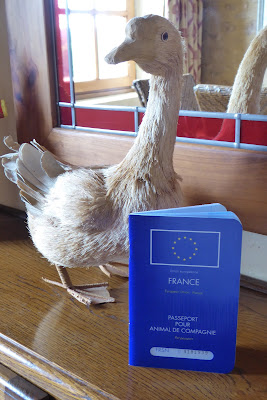 Yesterday we took Rick to the vet to arrange for his passport and to check with someone about his sore paw.   We went in just after 9.00 a.m. to make an appointment but were told there was no appointment system but to return between 2.30 and 4.30 in the afternoon.  We went back at 2.30 and there were already three dogs in front of us in the queue.

All was going well until a feline emergency arrived, it looked like someone’s cat had been involved in an accident.  We waited for two hours.  Rick behaved beautifully, I got extremely fidgety.  I’m not very good at waiting.  Paul told me to go and sit in the car.  I sat quietly.

Eventually we got to see the vet and he explained that a grass seed had become embedded in Rick’s paw.  Apparently it’s been a very bad year for grass seeds and a lot of animals have suffered, either by inhaling the seeds or paw problems.  I thought this countryside would be ideal for dog walking but there are hidden dangers.  I’m going to have to check Rick’s paws on a daily basis.  The vet cleaned Rick’s paw and gave him an antibiotic injection plus his rabies jab which is needed for his passport.  Rick’s passport now enables him to travel freely within Europe. 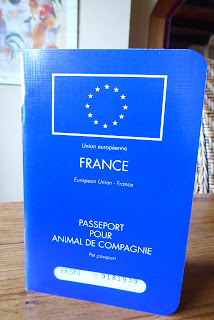 The heavens opened while we were in the surgery and it was absolutely tipping down with rain.  Paul fetched the car so that Rick and I didn’t get too wet.  There was a lot of thunder and more rain after we got home but storms don’t seem to bother this perfect dog.  He had his dinner and promptly threw up, just missing my expensive rug.  Side effect of the antibiotic no doubt.