My bungalow has been invaded by workmen again!  The kitchen fitter is here this week to install new units and sink in my utility room.  There is a lot of hammering and banging so I hid myself away in the garden room to escape the chaos and do some more work on Steve the Kangaroo (aka Mouse on Skis).

Steve has now had his paint job and is flaunting a nice bronzed patina.  He’s quite cute but looks a bit crude on close inspection.  Fun art rather than fine art. 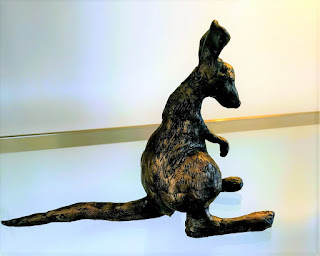 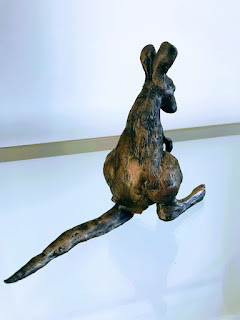 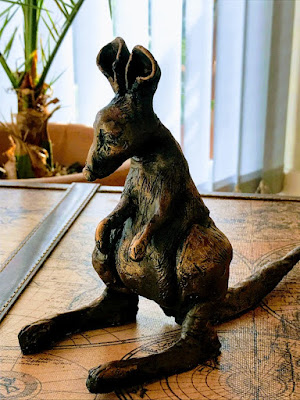 It’s dull and very windy here today.  Rick always gets a bit lively in high winds and today was no exception.  We headed down the driveway to turn left down the avenue when I saw a horse and rider approaching.  So I turned around in the opposite direction only to see two more horses waiting at the junction.  Rick really goes berserk when he sees horses so I dragged him back up the driveway until the first horse went by.  He still barked and spun me round in circles a few times.  When the road was clear we set off along the avenue towards the church.  Rick was trotting alongside me nicely until a cyclist whizzed by from behind; I almost lost control of Rick who was keen to race after the bike.  I wish cyclists would give me a wider berth and some warning; I always ring my bell or sing when I cycle up behind pedestrians. 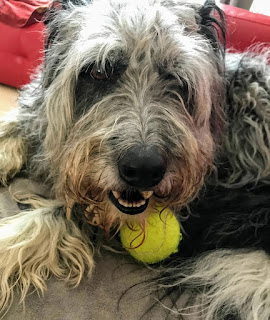 The rest of the walk was uneventful until we reached the home stretch and a farm tractor came trundling along the road.  Was Rick going to ignore the tractor?  No, of course not.  Another battle to restrain him.  Horses, bicycles, tractors – Rick’s favourite antagonists.  I was exhausted by the time I got home.

Back To The Future

Yesterday Paul and I went for our Covid jabs.  We had booked matching appointments at the Lincoln Showground, a fifteen minute car drive away.  The process was very efficient with marshals directing cars and people.  The only thing that struck me as strange was the number of times we were asked the same questions, i.e. name, date of birth, any symptoms of Covid etc.  Four times I counted. 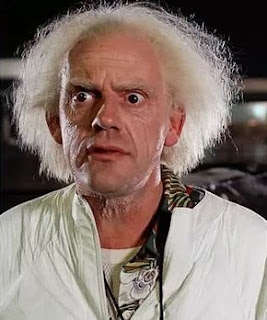 After checking in we were directed to a desk with a doctor and student nurse.  The elderly medic resembled the doc (Emmett Brown) from Back to the Future with wild hair and psychedelic scrubs.  I suspect he was a retired volunteer as he struggled to master the registration process on the computer.  After confirming our details and answering another set of identical questions we proceeded to the nurses’ station where we finally received our Astra Zeneca jabs.  A fifteen minute wait to ensure we didn’t collapse with anaphylactic shock and then we were on our way home.

Today we are both just feeling a bit tired and achy so a lazy day is on the cards.  I am just grateful that we have had the opportunity to be vaccinated against this ghastly virus.

I’ve been playing with mud again.  I had some clay left over from Dennis the Hare so I decided it would be an easy task to make a kangaroo.  Unfortunately my sculpting didn’t go quite to plan.  The armature wire wasn’t quite strong enough to support his body so the legs collapsed and he has ended up looking more like a cartoon mouse on skis.  I know that kangeroos have big feet but perhaps not this big; he could get a job as a clown.

Anyhow I shall let him dry for a couple of days and then give him a bronze paint job.  His name is Steve by the way.

It’s a murky day, only about 7 degrees outside, but it feels positively balmy after the recent freezing temperatures we’ve had. The snow has all melted but there is still a glacier in Middlefield Lane; there is a constant stream of water running down this lane, no one seems to know where the water is coming from.

Paul fetched me some apples out of the garage that we have been storing over winter. They are slightly yellow but still a good flavour. We still have two more loaded drawers but I don’t think we will manage to use them. 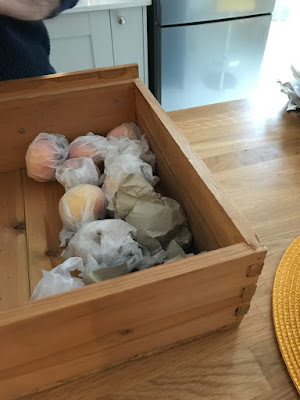 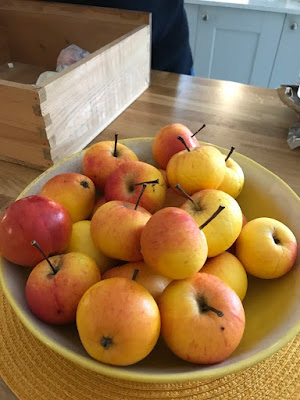 Meanwhile the apple and plum wines have finished gurgling and are sitting quietly in the dark. The longer they are left to mature the better the taste. The price of wine in the UK is rising so I’m hoping we have some success with our own wine.

Hare Gets a Paint Job

Today I painted my hare...

We finally got some snow in Lincolnshire. Just a light covering in our village although I think it is heavier up in the Wolds. The children were out early this morning sledging down Washdyke Lane but the snow wasn’t really deep enough.

When I was a young teenager living in the Yorkshire Dales we used to get ‘proper’ snow. My step-father made me a sledge. It was a hefty beast constructed from wood with steel runners. It was hard work lugging it up the hills but once the sledge started to move it would gather momentum and really travel fast.

One day I grew bored sledging down the modest hill in the paddock behind our house so, accompanied by Bonnie, my dog, I dragged the sledge further uphill until I was up high overlooking the village. The field was clear of sheep and there was a wonderfully long downhill run. It was fun to start with, bouncing along at a gentle speed but I started to go faster and faster and realised there was no run out at the bottom of the field, just a stone wall to block my way. I hung on to the rope in a sheer panic when a yellow flash darted in front of me. I threw myself to the left to avoid hitting Bonnie and we tumbled over in the snow, coming to a stop just a few feet away from the wall. I never took my sledge up that hill again. 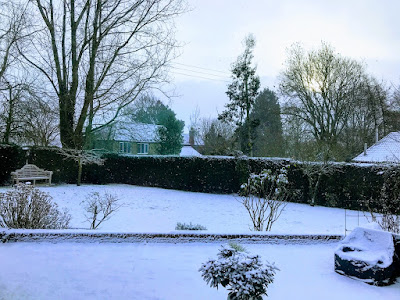 A mysterious parcel arrived for me a few days ago.  It was a gift from my daughter in Sydney and contained a big lump of mud!  It was a DIY pottery set.  Such fun! 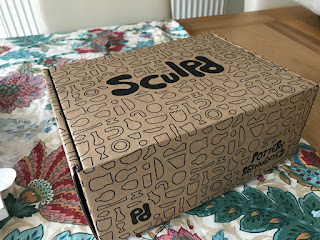 This morning I cleared the decks and decided to have a play with the clay.  Not content with making a simple pot I decided to sculpt a hare.   I probably should have chosen a pot. 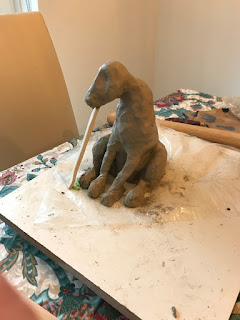 My weakness is impatience.  I ought to have studied several drawings of the anatomy of a hare before I started but I was keen to get stuck in.  So my hare’s head is rather too big for his body.  And the ears kept flopping over.  He looks rather more like a long eared dog than a star gazing hare.

I don’t have a kiln so it will take several days to dry.  I rather suspect his ears might drop off when I take the wires out.  But yes, it was fun and he is definitely one of a kind. 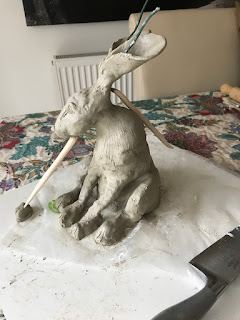 Thank goodness that big window went in yesterday while it was sunny and dry, today we have sleet and rain. The room was very exposed for a while after they took the old frame out.

But it is all finished now and I can once again freely stroll around my home without the risk of bumping into strange men. 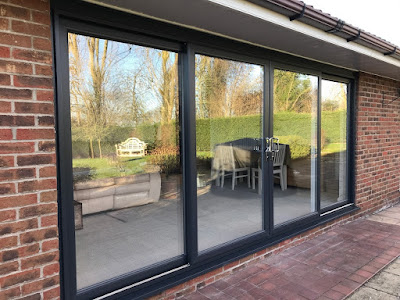 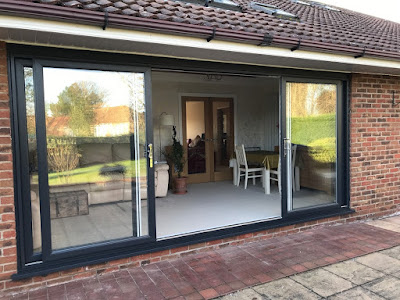 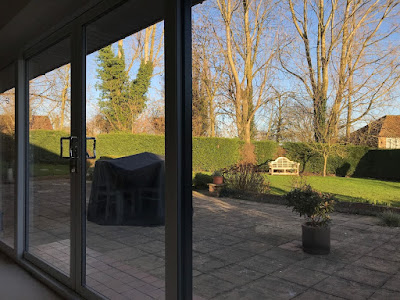 The window replacement project was driven by Paul, he truly disliked the old brown framed windows.

Actually, I quite liked them but they did need replacing, so I reluctantly agreed to new, white framed windows. We considered other colours but finally settled on classic white with a grey front porch and anthracite sliding doors as a contrast. I was sad to say goodbye to my brown windows but I have to admit that the white and grey work well together and gives the place a fresh new look. 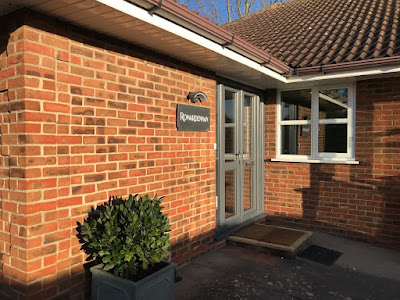 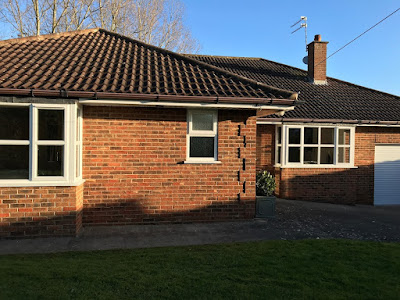