There are some places  that you don’t really want to visit but somehow they attract you like a magnet.  St Denis in Paris was one such place.  On two occasions we accidentally managed to take the exit road to this suburb of Paris while travelling the ring road around the city.  We now have a similar magnet in Lincolnshire – Brandy Wharf!

A few weeks ago Paul set off with Rick and his trailer to get a load of compost for his new vegetable plot.  He got lost on his way home and ended up at Brandy Wharf, a small hamlet next to the River Ancholme.  This morning we set off for another cycle ride; Paul promised me it would only be a bit longer than yesterday’s ride.  We were not supposed to go anywhere near Brandy Wharf but, you guessed it, we did!  Paul was very puzzled as to how we had got there but checked his map and found a short cut home alongside the river.  It was a rough track but quite a pleasant ride.  I’m not so sure it was a short cut though.

Legend suggests Brandy Wharf has links with smuggling but another story is that its name is derived from some Viking settlers named Brande.  They became stranded after their invasion in 867AD so set up a ferry service across the River Ancholme. The west bank pick-up point became known as Brande’s Wharf.  Until recently it was famous for its Cider Centre but sadly that closed in 2014.

What a glorious day!  Blue sky and sunshine from morning until dusk.

No excuse not to get the bicycles out today.  We set off after breakfast and did a short 13 km round trip.  It felt good bowling along the roads at a fair speed but a bit tougher as we turned into the wind.  We rode through Atterby, Snitterby and Bishop Norton, the pretty villages providing welcome relief after long, straight stretches of road.

The garden is still springing surprises on us.  Our latest discovery is the stunning Pieris Forest Flame, at least that’s what I think it is.  Pretty clusters of white flowers and flashes of red. 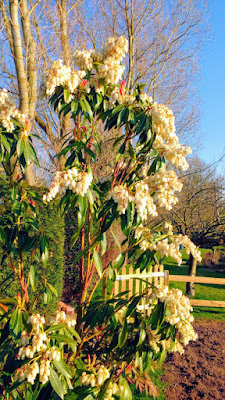 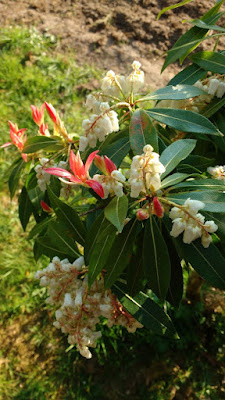 Yesterday Paul and I went to a big garden centre in Brigg.  It was a massive place, the display of plants was almost overwhelming.  It was bizarrely home to an array of exotic animals.  The models were animated, as Paul found out when he touched the elephant’s tusk.  The elephant raised his trunk and his ears started to flap and Paul jumped about six foot in the air.  We resisted the temptation to buy an ostrich or dinosaur for the patio and settled on a cordyline plant instead. 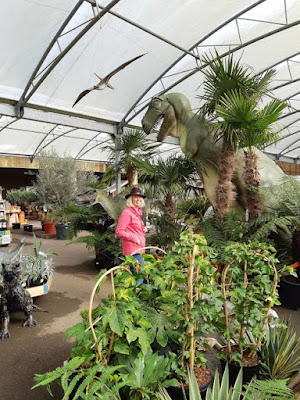 P.S.  The bear rug will not be necessary after all, an application of 3% Hydrogen Peroxide worked like magic and has made the stain on my carpet almost invisible. 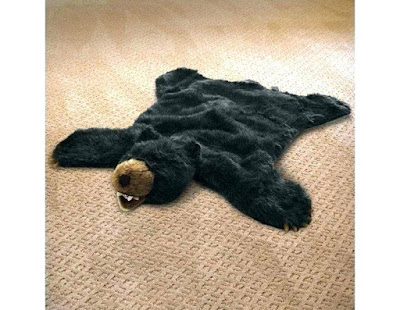 I thought about covering the wine stain on my carpet with an animal fur.  Paul said it would be a trip hazard. 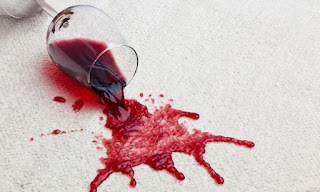 Most of the carpets in the bungalow had to be replaced when we moved in; the bedroom flooring was badly stained with spilt drinks, or worse! But I was very happy with the luxurious, deep pile, cream carpet in the lounge.

On Sunday Paul and Kat went to Manchester to watch cycle racing at the velodrome so I was home alone with Rick.  Early evening I prepared a supper tray with some cheese and biscuits and a large glass of red wine, I was going to settle down in front of the television and watch Escape to the Chateau.  I walked though the dining room and as I entered the lounge I knocked the edge of the tray on the door.  The glass somersaulted off the tray and I looked in disbelief at the large puddle of red wine spreading across my cream carpet.  It had even splashed up the newly painted walls.  I could not believe what I had done.

I spent hours trying to mop up the damage with very little success.  The wine had completely penetrated the deep pile.  I tried everything – Vanish, salt, vinegar, bicarbonate, washing up liquid.  Paul went over it with the Vax carpet cleaner yesterday morning but the stain remains.  I have one more trick to try – hydrogen peroxide.  If that doesn’t work there is only one solution – a new carpet.  Bah!

Spring must be here because there are newborn lambs frolicking in the field behind the village hall.  They are all black as the ace of spades.  As the lambs mature their fleece will turn white with the distinctive brown marks of Jacob sheep.


At coffee morning Rocky, one of our neighbours, explained to everyone in detail with great authority how, if a sheep has triplets, the third lamb will be given to the mother of a single lamb,  smeared in the afterbirth of  that single lamb so the mother accepts it as her own.
“Didn’t know you were such a country boy, Rocky” said Paul.
“I’m not, I saw it on Countryfile.”

I was just relieved for the conversation to move away from funerals and broken hips. 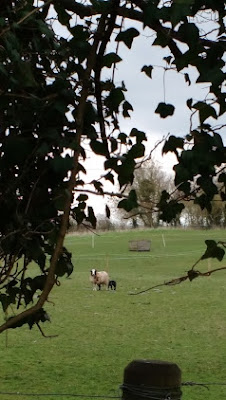 I have been making an effort to get involved in village activities but it's clearly not enough.

"Are you sure you don’t want to join the Line Dancing group on Friday?  How about swimming on Tuesday?  Pilates on Thursday?  You must come to the Book Club surely?  Ladies Luncheon Club? Do you think it would be a good idea to start a Gardening Club?"

I am just very protective of my free time and don’t really like committing to something on a regular basis.  Dog walking, gardening, cooking and cycling keep me very busy and entertained and for the rest of the time I’m just happy doing nothing!