It’s been raining for most of the day.  The sun was shining when I went out with Rick at 8.00 a.m., there was a heavy dew and the air was fresh.  Philippe was busy digging up his potato crop when I got back.  By 10.00 a.m. it was pouring with rain.  Philippe doggedly continued working in his potager but finally gave up and went indoors. Paul is bored so he is baking a Mezze Pizza Braid (courtesy of Bosh) for lunch. 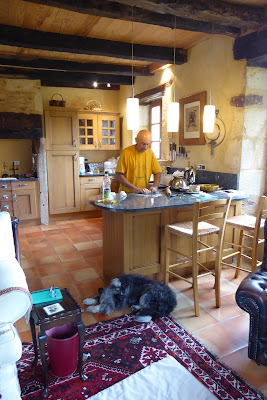 The filling for the pizza braid comprises tomato paste, red peppers, artichoke, sun dried tomatoes and olives. We didn’t have any red peppers so we used green instead, and substituted artichoke with aubergine.  We also used pesto instead of tomato paste.  Apart from that Paul followed the recipe precisely! 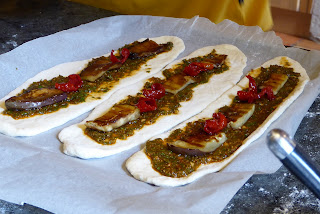 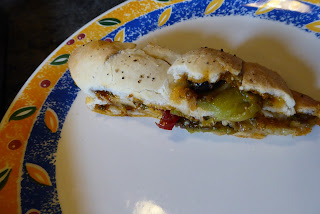 It took a bit longer to put together than the Bosh demo and their video doesn’t show all the washing up either.  But it was a very tasty lunch, might have been nicer with red peppers.  Not sure if we would do it again as it takes a while to gather all the component parts.