The Frenchman Who Kicked The Hornets Nest


One hot summer's day last year Paul was cutting the laurel hedge with his shears when he stumbled across a large hornets’ nest.  He made a hasty retreat! A tentative, closer inspection of the insects revealed them to be Asian hornets. This dreaded insect not only has a horrid sting but has colonised huge swathes of France and, with a few hornets capable of destroying 30,000 bees in just a couple of hours, honey production has plummeted.


Paul went to look for Philippe, our neighbour.  He was out so Paul spoke to his wife Patricia, to ask if she had a contact number for the local Pest Controller.  She did. “But they will charge you 70 euros,” she added.  A hefty fee but we clearly couldn’t leave the nest in situ.

Later that afternoon, before Paul had been able to make any ‘phone calls, an apparition appeared in our garden.  It was Philippe dressed in wellington boots, a heavy oilskin coat and matching hat.  He was pushing a wheelbarrow containing a gas bottle with an oxy acetylene torch.

My pleas for caution were ignored and without further ado Philippe merrily lit the flame thrower and thrust it into the middle of the hornets’ nest.  The hornets were instantly incinerated, they certainly didn’t suffer.  Unfortunately a large section of our laurel hedge was incinerated too.  Still, at least it didn’t cost us 70 euros. 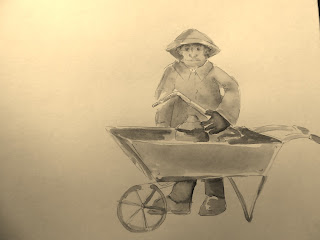