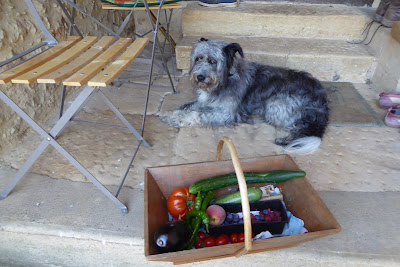 The potager was looking very dry and wilted when we got back last week but it has recovered well.  This morning I picked a whole basket of goodies.  Even the raspberry canes have finally started producing. 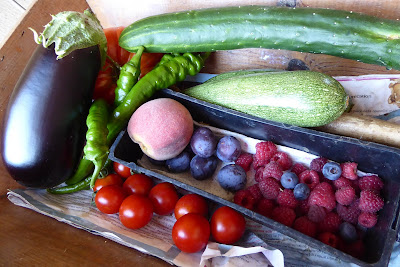 Earlier this morning I took Rick for a walk through the chestnut woods.  I tried to hurry him through the hamlet but, as is his habit, he squatted and did his poo right outside the neatly manicured grass of the teacher’s house.  I bagged it but as there are no bins out in the countryside I was forced to carry it for the duration of the walk.

I tried tying the bag to Rick’s leash but it swished and swayed so much it was in danger of being dispersed everywhere.  So I tied it around my wrist where it hung like a neat little handbag. As we entered the woods the flies gathered around mine and Rick’s heads.  Nasty little creatures trying to get in your mouth, nostrils and eyes.  I couldn’t adopt my usual trick of swishing them with a fern because I had a bag of poo around my wrist so I put my sunglasses on to keep them away from my eyes.  This presented its own problem because the woods are dark and shady and I couldn’t see where the heck I was going.  Such fun!

When we got home Paul was working in the potager.  “Did you know you’ve got a cloud of flies around your head?”