Could it be Covid? 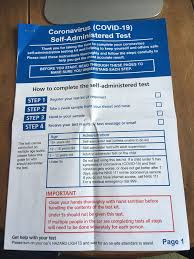 Paul was unwell over the weekend with tummy pains and diarrhoea.  More worrying was his very high temperature and slight cough.  I immediately de-camped to the guest bedroom.  On Sunday he still had a fever so we booked a Covid test at the local drive-thru centre.

The test centre was at the Lincoln Showground and was clearly signposted.  There were tents, portacabins and cones spread out over a large area.  At the entrance a man approached with a sign telling us not to get out of the car or open the windows.  We trundled on to the next checkpoint where a young woman indicated we ring the ‘phone number displayed on a large sign.  This was so that we could talk to her on her mobile and listen to instructions.  I suppose if you didn’t have a mobile they would just shout at you.

Paul was asked if he wanted to self-administer the test or have someone else do it.  He opted for the self test.  This may not have been a wise choice.  We trundled on to the self-test station.  Ring the number on the sign again.  Asked if anyone was sitting on the back seat.  What?  (We then realised that our rear seats have tinted windows so people outside can’t see in.)  I had to open the rear window so they could lob the testing kit into the back of the car. It was all starting to feel very surreal.

Trundle forward and guided to a parking bay.  There were stewards and cones everywhere.  We only saw one other car at the centre while we were there.  Paul opened the kit and read the instructions.  He had to swab his tonsils five times.  “Where are my tonsils, is it that dangly thing at the back of my throat?”  I told him to aim for the fleshy bits at the side of his dangly thing.  Of course it made him gag.  Then he had to put the swab up his nose before putting it in the specimen bottle and into a bag.

We then drove on to the next station.  Ring the mobile number again.  They checked the bag and scanned it.  Then we were instructed to open the car window and lob the bag into a bucket held at arm’s length by the centre worker.

We were thanked for visiting and guided out of the centre, cheerfully waving at the stewards. It was like a day out at the zoo.

Paul got a text and an e-mail today, 24 hours later, with the result.  Negative.  At least we know he hasn’t got Covid.  I’m still staying in the guest room.