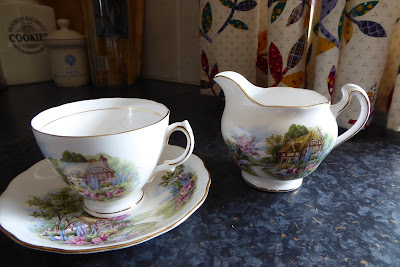 Traditionally a ‘bottom drawer’ was a collection of linen and other household goods that a young woman collected in preparation for married life.  When I was a young girl such a tradition was a bit old hat but that didn’t stop my Gran from putting a drawer together for me.

Every week she would save something from her old age pension and buy a piece of Royal Vale bone china until she had a complete tea set for me, six plates, six cups and saucers, a milk jug and a sugar bowl.  This was presented to me along with some other kitchen ware when I got married.

I treasured this tea set but it spent most of the time hidden away in a cupboard and after a few house moves the tea set got packed into a box and lived in the attic.

When we packed up our things and moved from France I had to leave many treasured things behind - the crystal decanters, my old sewing machine, my books.  Every inch of the car and trailer was packed and I had to make the difficult decision to leave Gran’s tea set behind.  I had to be realistic, the tea set was not a useful or valuable item.  I tried not to be sad as I saw it sitting in its dusty old cardboard box in the barn.

Just as we approached Paris, Paul said “I’ve got a confession to make.”

“What did you break?” I asked.

“I managed to find space for Gran’s tea set.”