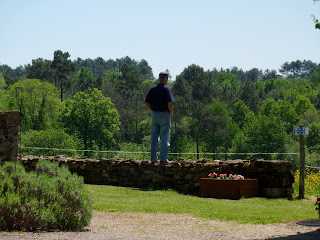 It’s that time of year when everything gets covered in yellow pollen.  Our house is surrounded by oak, chestnut and pine forests.  It’s probably the wind that causes the sudden spectacular yellow clouds of pollen but it looks like the trees are spontaneously exploding.  Apparently it’s the long phallic male cones of the tree (female ones are larger and rounder) that issue the pollen seeking to fertilise the seeds of the female cones.

Cars, bikes, garden furniture, windows, sleeping dogs etc. all get a covering of this yellow dust but it doesn’t generally cause any allergic symptoms.  Apparently the pollen doesn’t stay in the air long enough to be a respiratory irritant and pine tree pollen is not considered an allergen, unlike oak and grass.  It is even said that the pollen contains powerful antioxidants and vitamins and can be eaten for health benefits.  Paul said no thanks when I offered to sprinkle some on his dinner.

So as long as it’s not causing me to cough and sneeze I guess I can put up with wiping everything with a cloth, and I’ll just put off cleaning the windows until the pollen season is over. 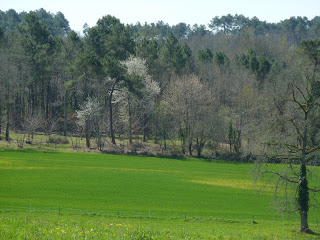