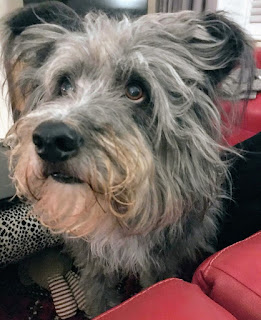 Rick has just been outside barking at the rooks that were attacking a squirrel in the trees.  Sometimes nature can be hard to witness.  Yesterday I walked into my bedroom and came face to face with a hawk devouring a blackbird right outside my bay window.  I crept away and left him to his meal.  He must have been hungry because there were just a few feathers left after he flew off.  It’s a pity he chose blackbird instead of pigeon from the menu. 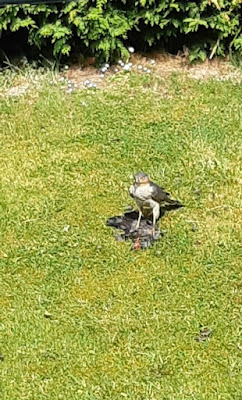 We’ve had Rick for five years now.  He was about four years old when we adopted him so he’s nine years old now and starting to show his age.  A little more greyness around his face and he moves quite stiffly when he gets up in the morning.  He still races after his tennis ball in the garden but doesn’t demand that it is thrown quite so many times.


He loves sitting under Sarah’s desk when she is working or guarding her slippers.


He is extremely affectionate and loves to climb up on laps for cuddles.  He won’t accept that perhaps he is a little too big to be a lap dog.