When Sarah was home for Christmas I guessed that things were not going too well between her and Chris, her fiancé.  A few weeks after her return to Sydney she announced she was coming back to the UK.  I was so surprised, you could have knocked me down with a feather!

She gave notice to her employers, arranged for all her worldly goods to be packed up and shipped to England, and booked a one way ticket home.  Paul collected her from Manchester Airport on 8th March.


Sarah has worked for her employers in Sydney’s CBD for over ten years and the company was not prepared to lose her!  Thanks to the magic of modern technology she is able to continue in her publishing and multi-media role working from Lincolnshire.  Currently her office is located in my garden room but at the end of May she will be moving to brand new office space close to Lincoln.  The modern concept of shared working space will hopefully give her the opportunity to meet and interact with other people.

In the meantime one half of my precious garden room is given over to a desk, computer and two over-sized monitors.  The other half has been commandeered by Paul with his young plants and some very snazzy lighting to make them grow straight. 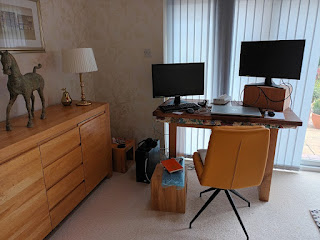 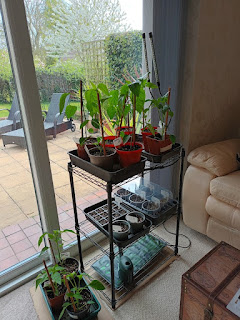 I have been overjoyed to have my daughter back home but at the same time it has been difficult to witness her sadness and disillusionment.  She had such high hopes and exciting plans when she set off to Australia all those years ago.  But she is strong and determined to maintain her independence in the future.  It is early days and it will take time for her to meet people and make new friends but I know she can build a new, exciting and rewarding life in England.