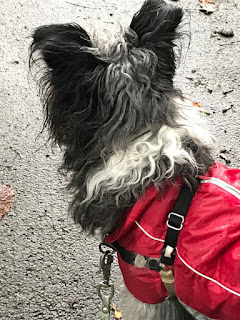 Rick is a good natured, friendly and loveable dog – until he comes face to face with the milkman, the newspaper delivery man or the postman at which point he turns into a demented werewolf and I have to hold his lead very tightly to restrain him.

On Tuesday I set off with Rick for his early morning walk.  It is always carefully timed so that we do not encounter any of the people mentioned above.  We stepped outside into a white, frozen winter wonderland, it was very pretty.  I set off down the driveway and turned left to walk along the main road through the village.  After a few yards I realised that the pathway and the road were covered in ice and my feet were starting to slide from underneath me.  I’m okay on roller skates but not on ice.  Just to make matters worse the milkman suddenly appeared ahead of me, quite a distance away but coming towards us.  Rick pricked his ears and his head went up, he had spotted his nemesis.  There was no way I was going to be able to stay upright on the ice if he started pulling on his lead.  There were no grass verges at this point so I headed towards the garden of an empty house where I was able to get a firm foothold on the grass.  We hid behind a hedge until the milkman had passed.

I carried on up the village walking along the grass verge and keeping off the slippery footpath and road.   We walked as far as the church and then turned around and headed for home.  I was just starting to relax when Mrs Yorkshire and her two spaniels, Bob and Sam, came into view walking towards me. Sam is a sweetie but Bob is a terror and this was going to be a sure recipe for disaster.  I decided to risk crossing the road and headed into a building site where we waited in the long grass until Mrs Yorkshire and her dogs had slid past.

We eventually made it home.  “Nice walk?” asked Paul.