We got up early this morning because Paul wanted to go for a bicycle ride.  I thought this was a bit excessive after his recent days of hard physical work but he was insistent.

“The sky looks a bit stormy.”
“No, it will be fine”
“Are you sure because you know I don’t like being outside in a thunder storm.”
“No, meteo haven’t forecast any storms.”

We did a 21 km ride, over to Frayssinet, back along the valley bottom and then a steep climb.  The biggest rabbit I have ever seen ran across the road in front of us, shortly followed by a grey squirrel.  It was like something out of Alice in Wonderland.  As we emerged from the woods I noticed that the sky had turned ominously black and decided to increase my speed.  When the first rain drops fell and the wind started I pedalled even faster and we managed to get home just before the squall hit.
“Timed to perfection” said Mr Smug. 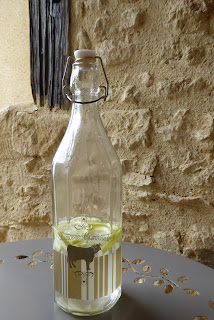 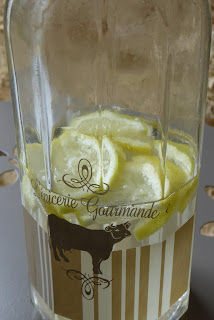 Yesterday I made some chilled homemade lemonade that I decanted into a pretty bottle in order to impress Rick and the ladies from the dog refuge.  It was stiflingly hot yesterday so the cold drinks went down a treat.  This morning I realised that getting the pieces of lemon out of a narrow necked bottle was not going to be easy.  I’ll use a jug next time.