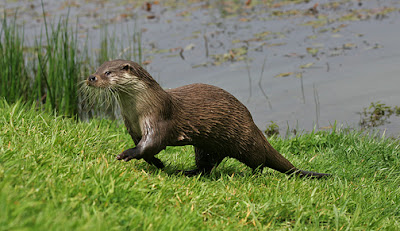 We had thunder and rain early this morning so we waited until the storm clouds had disappeared before setting off on our bikes.  The sun was shining again and it felt very hot and steamy.  Paul was looking to break some records so I had to work hard to keep up with him.  Eventually I rebelled and slowed down to a more leisurely pace as we cycled back up donkey valley.

At this time of year wildlife sightings are rare unless we get out very, very early.  By mid morning all the bigger animals have gone to ground to escape the heat of the day before re-appearing at dusk. There is a small stream that runs down this valley with pockets of bright yellow flag irises along its length. The road runs adjacent to it  and I suddenly noticed movement in the tall reeds.  At first glance I thought it was a pine marten but as it bounded towards the water I could see clearly it was quite a large animal.  It was an otter.  I was so excited I almost fell off my bike.  I have never seen an otter in the wild before.  At one time otters were almost at the point of extinction in this area of France and I believe it is still quite rare to see them around here.