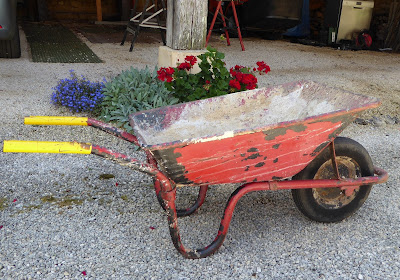 This is no ordinary wheelbarrow.  This is a relic of the infamous Heytesbury Red Barrow Display Team.  Twenty years ago it was a plain black wheelbarrow.  It was in 1995 that a group of  ordinary middle aged men in the village disappeared each evening with their trusty barrows.  I thought it was something to do with garden allotments  It remained a mystery until the day of the village school fete when they made their grand entrance as the Red Barrow Display Team.  The village had never seen such a spectacle before.  All the wheelbarrows had been painted bright red with yellow handles and plywood wings attached.  The formation ‘flying’ was impeccable, with near mid air collisions, jumps, and impressive turns.  This was all performed to Battle of Britain music and a hilarious commentary. 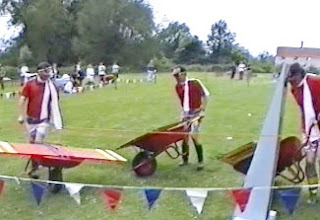 Earlier today I used the wheelbarrow to take a load of garden detritus up to the woods.  The wings are no more.  I wonder how many other faded red barrows with yellow handles are lurking in sheds and gardens in rural Wiltshire.