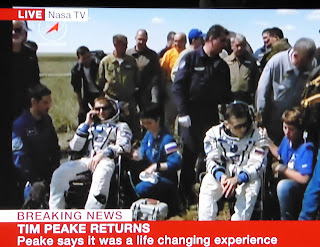 I’m watching Tim Peake’s return to earth live and I’m feeling really anxious.  He’s due to land in about half an hour.

“Why are you anxious you silly woman?”
“He might crash, or his capsule could disintegrate, I can’t bear to watch.”
“But you don’t even know Tim Peake.”
“He’s got a family, I can imagine how his wife is feeling.”


My husband should know me better.  I get anxious about everything – Andy Murray playing tennis, the Referendum, the weather forecast, finding a suitable vegetable for John Gray’s competition. I have just spent half an hour trying to do something artful with a pile of strawberries and a courgette.  Nothing doing. 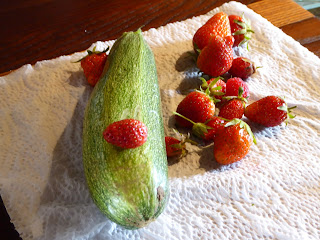 “He’s just gone over Egypt.”
“Ooh.”
“Capsule’s just separated.”
“Is that good?”
“Two minutes until re-entry.”
“Command to open parachutes.”
“They are going to jump out?”
“No, the parachutes are attached to the capsule.”
“I knew that really.”
“They’ve got a visual – parachutes are deployed.”
“Is he down?”
“He’s down.”


He had a smoother landing than the one I had after four attempts in Madeira. Now, I wonder if I could make a space rocket out of a courgette....
Posted by Sue at 11:29