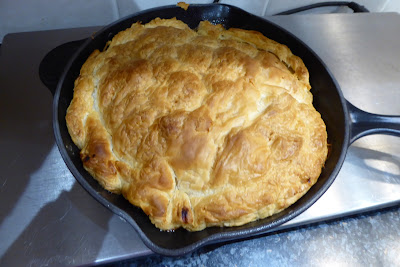 Yesterday I decided to make an apple tarte tatin.  It's the French version of an upside down apple tart.  I thought there was a fair chance it would be a disaster and that the caramelised sugar would stick to the pan and everything would go horribly wrong.

The first problem was trying to caramelise the sugar on my halogen hob.  I am still unsure of the temperature levels with the hob so to start with I had it turned down too low and it seemed to take ages for everything to start bubbling and reduce down.  I plonked some pre-made puff pastry on top (the pan was red hot so it was tricky to handle) and put it in the oven.  The pastry puffed up and browned nicely so at least I knew there wouldn't be a soggy bottom.

Paul helped me turn it out onto a tray and I was very surprised and pleased with the result.  The tarte didn't stick to the pan and it was delicious.  I might do it again one day! 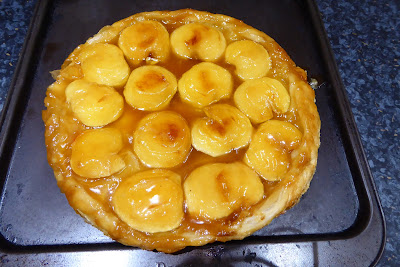 Last night we were relaxing in the sitting room watching television when Paul said he could hear an alarm.  Sure enough, there it was -  beep beep, beep beep.  We searched the bungalow high and low (Paul checked the attic rooms and garage too) but we couldn't locate the beeping noise.  Actually Kat and Paul did the searching while I continued to drink my wine.  Eventually I went to check on progress  and said, "it's coming from the kitchen bin!" 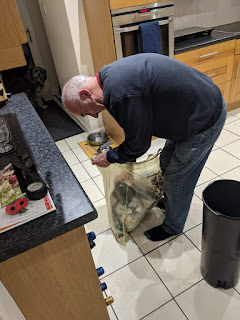 Paul looked slightly abashed and remembered he had taken the batteries out of an old carbon monoxide alarm earlier and thrown it away.  The beeping was the fault mechanism in the alarm, probably triggered by supper leftovers being thrown over it. 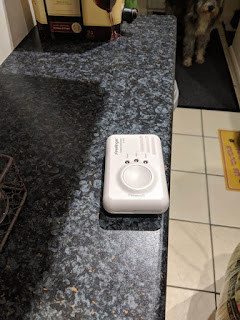