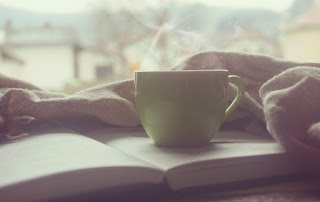 We have been having some early mornings, waking up at five and then getting up for breakfast instead of tossing and turning.  I have always been an early riser, lark not an owl.  This morning I slept until six but, after breakfast, felt tired and disinclined to join Paul and Rick on their walk, it was foggy outside and did not look welcoming at all.

I made a cup of tea and took it, like a guilty pleasure, back to bed and started a new book, a psychological thriller – I can’t remember what it’s called but it’s a bit of a page turner.  I read the first chapter and thought, right, better get up and start baking a batch of cakes.  But I really wanted to read the next chapter.  I started to climb out of bed and then thought, you stupid woman, you are retired and free to do what you want with your day.  So I read the next chapter.  And the next.  Then I got up and baked my cakes. Habit of a lifetime. It’s still only 9.00 a.m.

The book starts as someone who has let her house as an Airbnb and is uncomfortable with the thought of someone else using her home, using her things.  Next month someone else will be living in my home, sleeping in my bed, using my china, polishing my prized granite worktops, sitting on my sofas, burning my logs in the woodburner we installed.  It won't be mine anymore.  It’s a strange feeling.