Turn Around When Possible 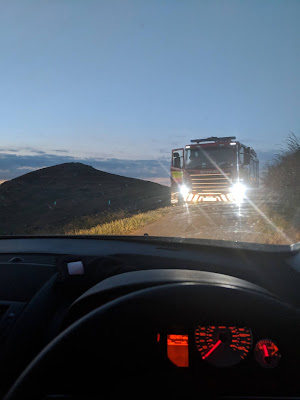 My RAF daughter, Kat, has come down for the weekend, she is currently stationed at Cosford.
I asked her if she’d had a good week.  That was when she sheepishly confessed to getting stuck up a mountain.

Kat is a clever girl but has absolutely no sense of direction.  She once missed a business meeting when she took the wrong direction on the motorway and ended up in Exeter instead of Leicester.  On Tuesday evening she drove from Cosford to meet a friend for a picnic in the Malvern hills in Worcestershire.  Of course it wasn’t really Kat’s fault that she found herself half way up a mountain track on her way home.  Sat Nav told her to take the next turning so she took it.  Kat quickly realised her mistake. “Turn around when possible” said Sat Nav.  Unfortunately that wasn’t possible with a steep bank on one side and a sheer drop on the other.  She gingerly drove on up the mountain track, hoping that there was a turning point ahead.  Further and further she drove in the evening dusk.

Suddenly her knights in shining armour appeared in front of her – the fire brigade!  A fire engine had been patrolling the area and had spotted Kat’s dilemma.  They helped her turn the car around and marshalled her down the mountain.  The fireman asked her where she was trying to get to.  He had a very wry expression when she answered “the M5?”