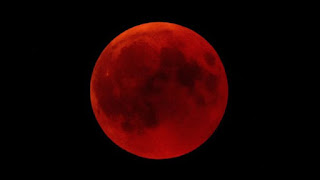 “I’ve found the moon!” Paul came puffing up the stairs to tell me late last night.  We had been eagerly waiting all evening for the moon to rise so that we could go and be dazzled by this special eclipse and amazing blood red moon. I followed him outside into the courtyard.

“Where is it then?” I said, peering into the darkness as Rick charged about barking at the bats.
“Between the trees.”
“What, that pale pink pimple?”
“Yup.”

We were totally underwhelmed.  It was a very small, distant moon and the faint cloud cover dimmed any redness into pale pink. At least the barn owls put on a display for us, swooping out of the pigeonnier and wondering what all the fuss was about.