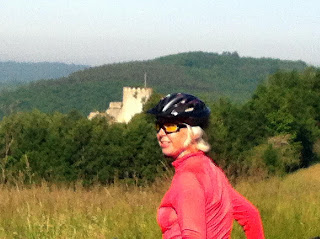 We went out on our bikes early this morning; the dew on the long grass twinkled like jewels in the sunshine and the hedgerows were colourful with buttercups and purple pyramid orchids.  Oops, no, that was on Sunday.  Today it is cloudy and drizzling.  We were in two minds whether to go out or not.

It rained all the way.

It was good to get outside though.  I saw a rabbit on the track ahead “Run, bunny run,” I shouted. Rabbits don’t have long, fluffy tails.  It was a cat.  I blamed the rain on my goggles. We cycled alongside the railway line and passed the train heading in the opposite direction south towards Agen.

“Why does the train driver always toot at us?” Paul asked.
“Because he can hardly ignore a mad woman in neon pink frantically waving at him,” I replied.

I just can’t resist, I get a childlike pleasure from waving at trains and getting a toot.