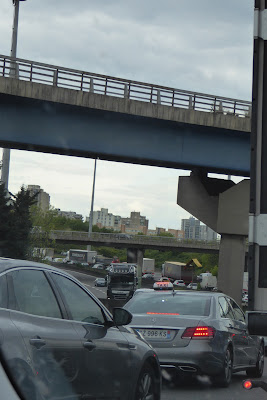 We were stuck in a bouchon on the ring road of Paris and conversation was becoming desperate.  At half four in the afternoon city traffic was always going to be a problem.  We had stopped at McDonald’s in Limoges (sorry Sarah and Cro) for a cheeseburger lunch; I got a free balloon and the coffee was very good.  Tonight we are staying in a Premiere Class budget hotel and dining out later at the Buffalo Grill.  All very cheap, quick, efficient and absolutely soulless.

The cucumber plants are in the back of the car and coping very well with the long journey.  Paul planted out the young tomato plants in the potager yesterday but the cucumber seedlings are just too small and tender to plant out.  So they have come with us.  By the time we return to France in a week or two they will have travelled some 1500 miles.   The Traveling Wilburys have got nothing on my Travelling Cucumbers.