Come Into The Garden, Claude


It has been wonderfully tranquil in the garden this afternoon, just a few bees buzzing in the lavender bushes.  Even the sparrows have been quiet.  Unlike yesterday.

A couple of weeks ago these signs suddenly appeared all over the local vicinity including at least three posts pointing down the track that runs through the side of our property. 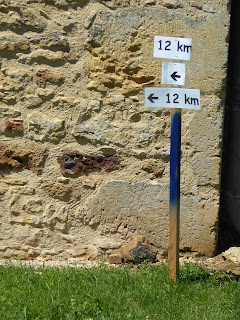 You may remember that last month we had a large number of horses galloping through our garden.  Yesterday it was a large number of middle aged men.  We were relaxing in the courtyard with a couple of cold beers and expecting to see a few walkers stroll past as we had seen a poster advertising a randonnee pedestre.  We hadn’t realised that there was also a 12 km organised run taking place!

I have never seen so many different shapes and sizes of runners.   A handful of fit young boys were followed by dozens of middle aged, knobbly kneed, sweating, huffing and puffing men.  Some of them looked on the point of collapse and I was trying to remember if I could still do CPR. 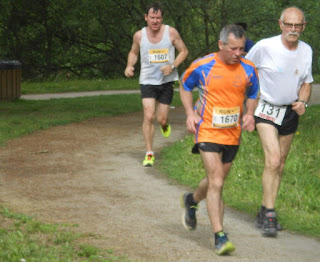 I mentioned to Paul that it would be funny if one of them mis-read the signs when lo and behold a runner came trotting straight into the courtyard.  I could not contain my glee and chortled out loud.  I would have offered the poor bewildered fellow a beer but he just kept running as if he wasn't lost at all and out the other side of the yard.  We almost fell off our chairs laughing.