Every time I heard Paul fire up the chainsaw when we lived in France I used to shudder, fearing that he would sustain some horrible injury.  Of course it was an essential piece of kit at our home in the French countryside and so I became accustomed to its horrible whine.  Needless to say I felt very relieved when there was no room for the old petrol driven chainsaw in the trailer when we moved back to England.

Our garden in Lincolnshire is quite modest in size.  The boundary on the northern edge has a line of Poplar trees that have grown up over the years on a strip of land that doesn’t appear to belong to us or the paddock on the other side.  The Poplars are far too high to be tamed but Paul was keen to cut down some smaller trees and undergrowth that were starting to encroach on the garden.  Yep, you guessed it – he needed a new chainsaw!

A few days ago I was busy indoors and Paul was outside tidying the garden; it was a cold but wonderfully sunny day.  I stepped outside and was met by this sight… 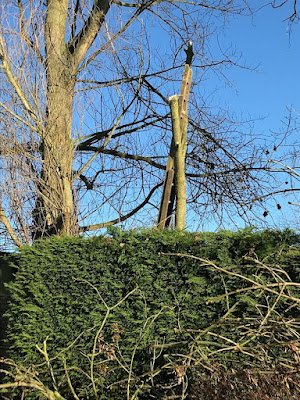 Apparently he didn’t want to worry me so he had quietly proceeded to cut down some trees!  His new battery operated chainsaw is very quiet so I had been oblivious to what he was doing.  Whatever next!