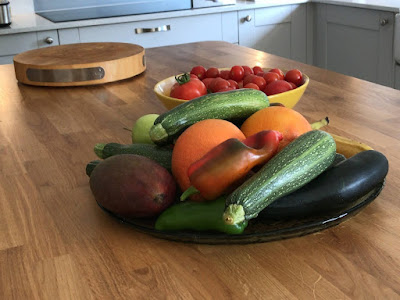 September, so far, has been kind to Lincolnshire, lots of sunshine and relatively warm.  We have managed some lengthy cycle rides, spent time in the garden and downed a few drinks on the terrace. Village life continues - art club and dancing for me while Paul goes bowling twice a week.  The pub is due to re-open at the end of the month after being closed for three years and Wednesday coffee mornings in the village hall are set to resume.

Some good friends from Wiltshire came to stay with us at the weekend, bringing their young dog, Buzz (a Bichon cross) with them.  We were a bit anxious as to how Rick would react with another dog in his home but they got on amazingly well, I think Rick just adored his young playmate.  They ran circuits around the garden and played tug-of-war with Mr Bunny.

The re-modelling of our sitting room has commenced.  The new fire has been installed and the chimney breast re-plastered.  The oak planks for the floor are due to arrive tomorrow but apparently they need to acclimatise before Paul starts putting them in place.  I’m sure all the effort and disruption will be worth it in the end.   I shall post some photos when it’s all finished.