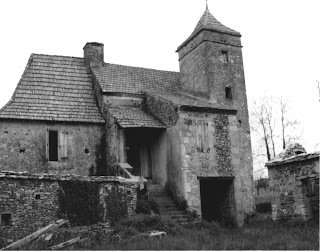 It’s the little things in life that please me...

“William’s back, quick look, William’s back!”  Was it the return of the prodigal son?  No, just my over reaction to the return of William the Woodpecker to the nut feeder.  Most years he monopolises the feeder, scattering the sparrows as he swoops in.  But this year we have been back almost a month and there was no sign of him until this morning.  Actually, it might be Wilhelmina, I must check the colour of his head.

Hearing the cicadas buzzing away as we cycled up the valley, surely a sign of warmer weather. 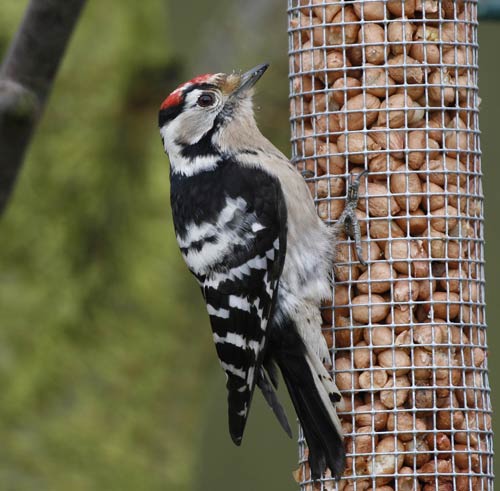 Hanging my washing outside in the fresh air – such a simple pleasure after a winter stuck in the confines of a flat in England. 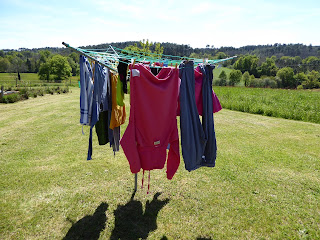 Finally, a long, cold martini in the sunshine before dinner.  Bliss! 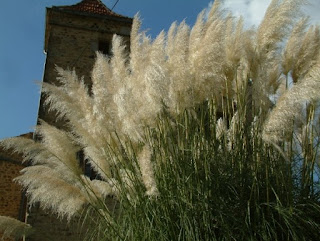 All this talk of toilets and drains from Tom, John and Rachel  has reminded me of an incident that happened here a couple of years ago.

There is no mains drainage here so we have a fosse septique that drains away our waste matter.  There is an inspection chamber in the garden with a heavy wooden lid on the top in case you ever feel the need to inspect the fosse.  At the side of this ‘well like’ structure is a pampas grass plant.  It is the most magnificent specimen, absolutely glorious in autumn with its striking feathery plumes.  But by the end of the winter the plumes are broken and bedraggled so it is necessary to remove the old plumes and cut the grass right back.

On this occasion I started to cut the long plumes away and Paul warned me not to stand on the wooden lid as it had started to rot.  After a while I realised that the job was too big for me to do with the garden shears and asked Paul to finish it off with the brush cutter while I went to make a cup of tea.

When I returned with the tea this is what I found... 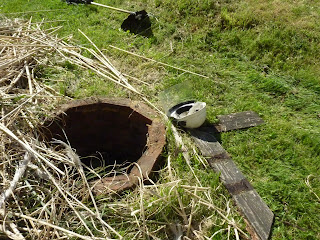 Luckily he wasn’t hurt.  He blamed me for setting a trap and camouflaging the hatch with the dropped pampas plumes!  As if I would do a thing like that. 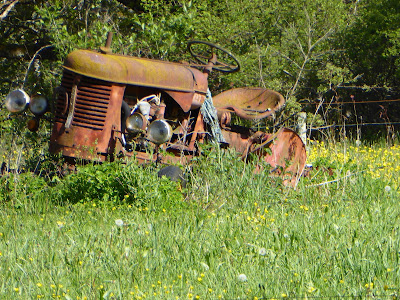 The sunshine returned today so we set off after coffee for a ride out along the ‘Cathedral’ route.  We didn’t actually ride anywhere near any ecclesiastical buildings but this ride has been christened by us due to the ethereal nature of the woodland we cycle through, the magnificent trees arching high above us with the sunlight filtering through.  It's enchanting.  I wanted to stop and take photographs but my cycling buddy was out to break the land speed record on two wheels so there was no stopping him.

But he did skid to a halt when he saw the old red tractor half buried in weeds in a farmer's field.  All the men round these parts hanker after tractors.  And who could resist the cute little calf pestering his mum for a kiss? They might be Charolais cattle but I’m not sure. 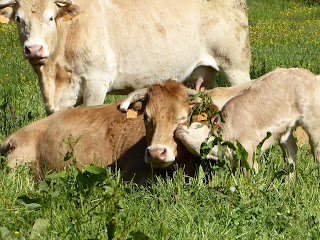 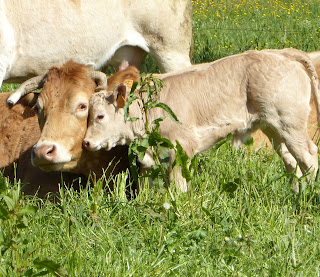